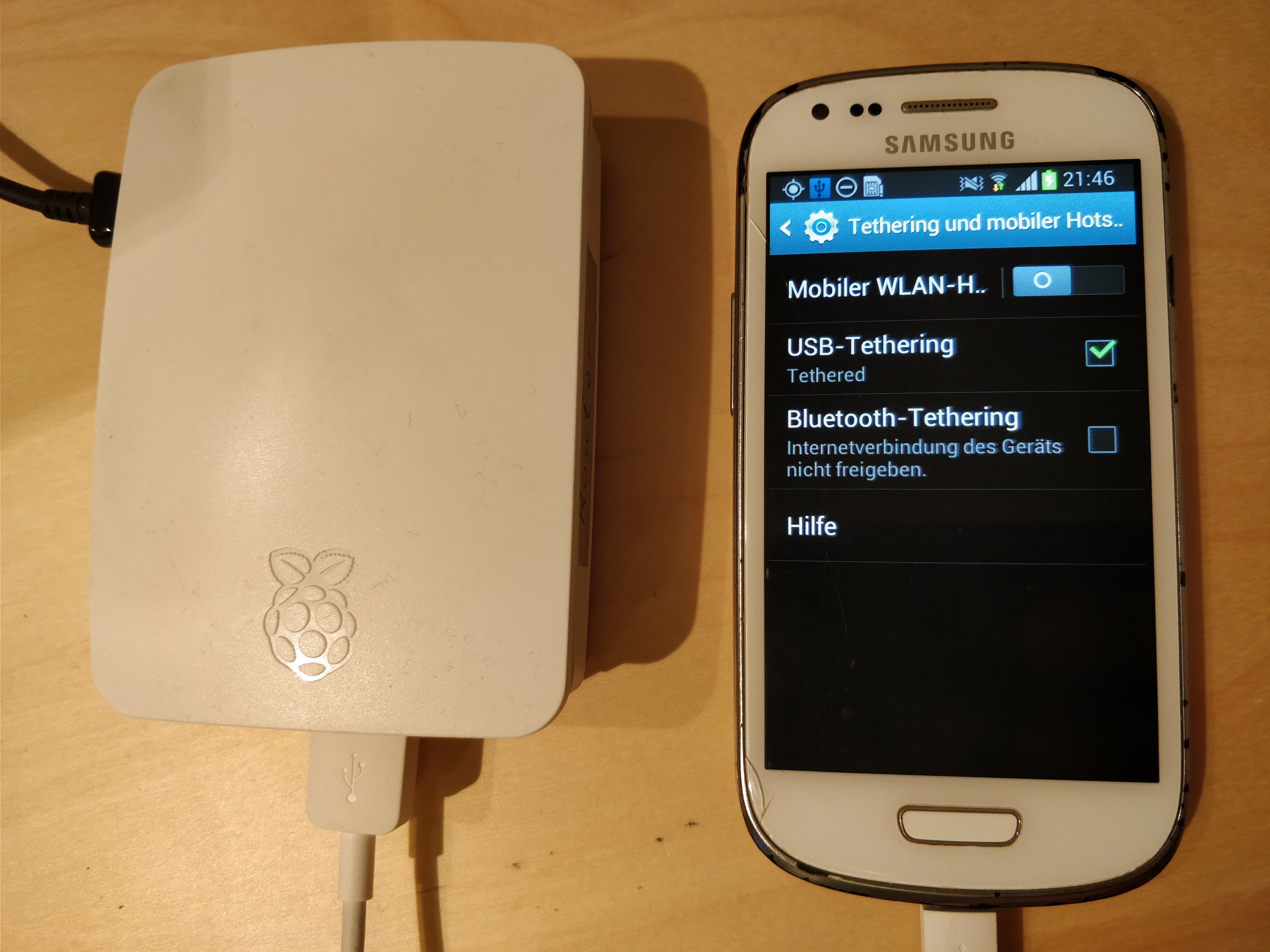 Nested networks are always a source of trouble. There are different subnets that require multiple NAT servers. Every layer adds unneccessary complexity. When a marina network is added, the network looks like this: 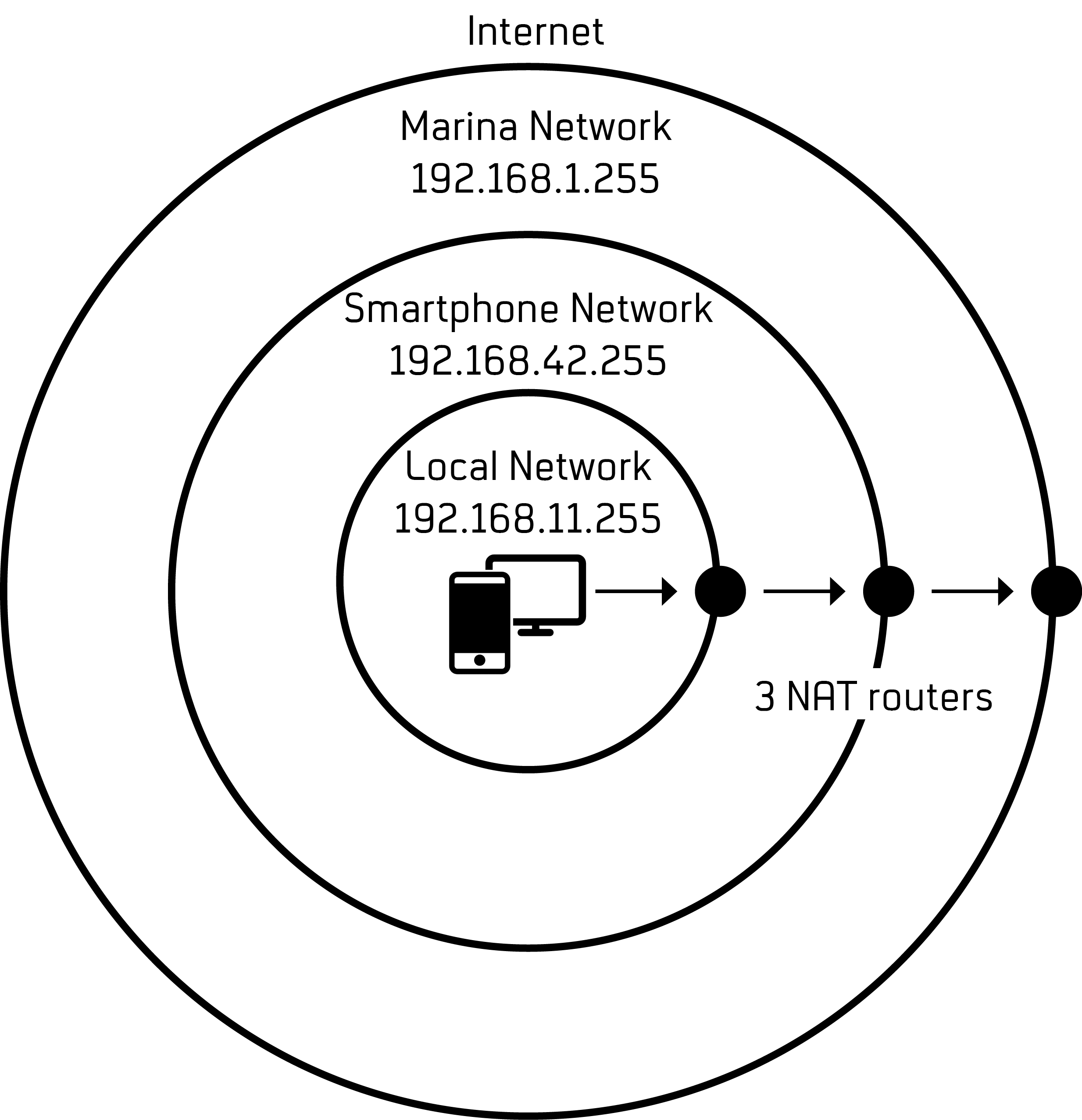 If the connection breaks or strange package loss occures, you have to debug all three local networks. The setup happens in all the different routers and you have to make sure they all work. Peeling the onion would be great for making things simple.

But from a usability aspect, this is a great setup. The smartphone is made for switching between GSM and Wifi networks. You can receive SMS text, setup all marina wifi firewalls and whatever you like on one nice touchscreen.

The local router focuses on the things that do not change very often. It does the security tasks and connects all the local devices.

Any old phone will do the job even if the battery is in bad conditions. The sim cards must be inserted, so it might become handy to have a dual sim phone. Then USB tethering has to be enabled and everything is up and running.

I chose a Raspberry Pi 3 with OpenWRT. OpenWRT is an operating system for small Wifi routers, so the Raspberry is way too big. So it runs extremely fast with this setup.

All kinds of Wifi and 4G LTE are no problem if you have a phone that supports the standard. DSL or Ethernet is not possible.

Usually the phone switches from Wifi to GSM automatically if the connection gets lost. So this works perfectly autonomously. If a new Wifi has to be set up, any crew member can do it as it works like they are used to with their own phone. Forcing a change of the network using remote devices is also possible with an app like Android Tasker. So here is everything possible.

Now we are talking about the downside. It is impossible to connect an external GSM or Wifi antenna. So the best you can do is buying a long USB cable to put the phone in a place with good network conditions.

Text message is perfectly possible in the phone’s app.

The raspberry needs 5V with a extremely stable source. It powers the phone over the cable. The power should be in the range of 2-5 Watt for the entire setup according to data sheets.

Any power bank can be used. The power is in the region of other wifi setups.

The Raspberry Pi 3 has just one 2.4GHz Wifi built in. The connection was very good inside the room. It is possible to add more adapters via USB. One Ethernet port is available.

There is a web interface with a lot of options and a clean design even on small screens. It is not pretty but works. For more options, a SSL connection and good documentation is available.

Long lease times and fixed addresses for servers are no problem.

SSH is built in. DLNA, FTP, SMB or whatever needed is possible. The Raspberry Pi 3 has already a huge disk built in if a large SD card is used.

As far as I can say it really works even if the phone is disconnected sometimes. There is a great Wiki.

It is possible to give devices real world domain names so SSL in web browsers is totally possible.

The Raspberry Pi has a lot input output pins. From within the web interface it is possible to configure one LED.

This setup really does what it is made for. Even if the router would fail, the phone would be usable. The security options are better than with any other setup.

Issues can occure because of the bad antennas in the phone. Another problem are the nested networks and the physically separated devices. This can lead to issues that are hard to debug. On the other hand, the great documentation of all elements in the setup should help.